So... I've been hiding from this blog for some time but lots of interesting things have been happening that I would love to educate you all on and hopefully inspire you to get out there and try something new within the health and fitness industry.

Fitness shouldn't be a chore, everyone is different and it's important to try a range of things to see what style of fitness you love. Once you find that true passion in something you love to do, you wont want to stop! Exercising will become fun and a lot easier. Change it up, try something new, and don't give up!

This year I became a certified level 1 MMAXFit instructor.
I've been a certified boxing instructor for some time but I wanted to change it up and try something different.
I admit I'm not a huge fan of cardio, so when I got asked to do the promotional video for a fitness company based on a cardio routine I was a little hesitant. This is when I was first introduced to MMAXFit and ever since then I have been wanting to train more and more.
For me, this isn't just training, it's fun, extremely challenging and something I look forward to doing. Not to mention you can burn up to 1100 calories in one 45min class.
(I'll post that promo video as soon as it has been released)

I now do weekly training with professional fighter Ian schaffa in preparation to start training my own clients and run my own classes at Bondi Beach. 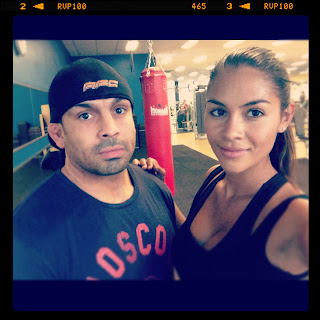 MMAXFIT has been developed in reference to the 12 years that Ian has fought and trained as a professional fighter, he wishes to pass on the training, experience and values that mixed martial arts has taught him.

I will be teaching a class Ian Schaffa at Bondi Beach on the 24th of November. If you'd like to see what it's all about come down and try the class for free. Make sure you email info@mmaxfit.com.au to reserve your place.

I'll also be doing MMAXFit 1on-1 so if you'd like to book in a personal session email me at dominiquebookings@gmail.com
If you would like to sign up for a one month Mmaxfit 'OUTDOOR' challenge that will get you the results you want in time for Christmas and New year.
Click here: https://www.debitsuccess.com/DDRApplication.aspx?templateid=58011f3b-80c6-4131-a483-3d6d2c8469c7 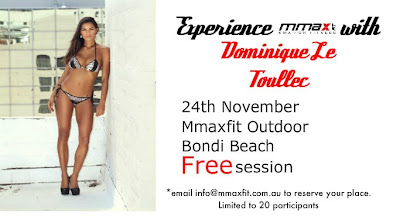 Here is a little more info on MMAXFit....

MMA has been accused of being barbaric however If you look at all the combat sports in the Olympics - wrestling, judo, tae kwon do and boxing and blend them together you have Mixed Martial Arts. Mixed Martial Arts (MMA) is a full contact combat sport. MMA rules allow the use of both striking and grappling techniques whilst standing and on the ground.

What are the benefits of MMAXFIT?
As MMAXFIT is an infusion of different combat style exercises it could be considered as one of the most demanding yet rewarding forms of exercise. MMAXFIT will improve your current level of fitness. MMAXFIT can be modified for beginner or advanced level participants and even those with injury or disability. A MMAXFIT workout incorporates upper body, lower body and core strength in a high-intensity fashion. MMAXFIT results in fat burning, increased endurance, strength, speed, flexibility, agility and hand/eye/feet coordination just to name a few

What is the UFC?
The Ultimate Fighting Championship (UFC) is the fastest growing sports organization in the world. UFC started in 1993, is in its 18th year of operation as a professional mixed martial arts (MMA) organization. UFC has revolutionized the fight business, and today stands as the world's leading MMA promoter, offering the premier series of MMA sports events.
The UFC has seven weight-divisions and showcases fighters of different disciplines including Boxing, Muay Thai, Brazilian Jiu-jitsu, Wrestling, Karate and other styles, - the UFC sought to identify the most effective martial art in a real fight. After a period of political backlash, the UFC gradually underwent reform by embracing strict rules and achieving sanctioning with State Athletic Commissions.
UFC is in 354 million homes worldwide, and can be seen on some form of television in over 145 countries and territories, in 19 different languages.
Producing over 30 live events worldwide each year, the UFC also boasts the most successful and longest-running sports reality show in history, The Ultimate Fighter®. What’s more the UFC’s has packed out arenas across the world, from Los Angeles to London to Toronto to Abu Dhabi to here in Australia. 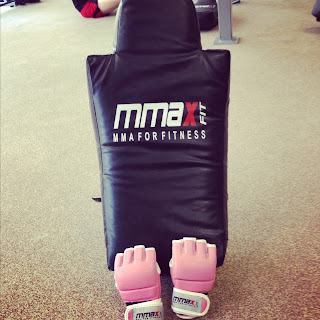 Dominique Le Toullec
Dom has many years within the health&fitness industry. Dominique has a strong background within personal training. As well as this Dom has a background in modeling fitness/fashion & great success stories in body transformations creating lean & sexy bikini bodies w her successful approach to training.